As a reminder that today and through out history there have always been so many people that have promoted dialogue, we are introducing some of them in this blog from time to time. We will be trying to select people that are not the most widely known. We do this to show two things: Firstly: There are even more people convinced about the peace enabling power of dialogue than you might think. Secondly: It would be good to have an internationally known sign for those who believe in dialogue to show that conviction and to recognize like minded others. 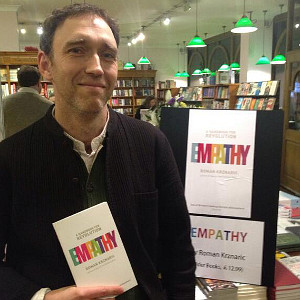 Roman Krznaric is a cultural thinker and writer on the art of living. He is a founding faculty member of The School of Life in London, and advises organisations including Oxfam and the United Nations on using empathy and conversation to create social change. He is also founder of the world’s first Empathy Library. His latest book is Empathy: A Handbook for Revolution. He has been named by The Observer as one of Britain’s leading lifestyle philosophers.
After growing up in Sydney and Hong Kong, he studied at the universities of Oxford, London and Essex, where he gained his PhD. He has taught sociology and politics at Cambridge University and City University, London, and has done human rights work in Central America with refugees and indigenous people. For several years he was Project Director at The Oxford Muse, the avant-garde foundation to stimulate courage and invention in personal, professional and cultural life.

He regularly speaks at public events on topics such as empathy, the history of love, the future of work, and the art of living. Recent appearances include the Edinburgh International Festival, the Latitude Arts Festival and the London Design Festival. His media work ranges from articles in the Guardian and Wall Street Journal to interviews on BBC Radio 4’s Today Programme, Channel 4 and PBS television in the United States.

Roman’s books are currently being translated into over a dozen languages. His blog dedicated to empathy and the art of living, Outrospection, has been featured in the media around the world. Over half a million people have watched his RSA Animate video The Power of Outrospection.

(Source of text and image above: http://www.romankrznaric.com)